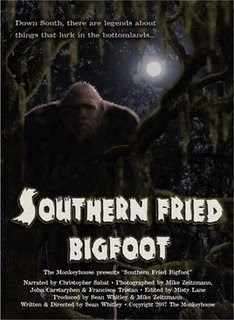 Last year, I highlighted a new DVD titled Southern Fried Bigfoot - which, as its name suggests, was all about sightings of giant, hairy, man-beasts in the southern states of the US (here's my original link).

Well, there is new news on the film, thanks to writer/director, Sean Whitley. As Sean told me last night, Southern Fried Bigfoot will finally will have its broadcast premiere on April 13, 2009 on The Documentary Channel, carried by DISH Network, at 9pm Eastern/8pm Central. The DVD will also go on sale on DOC's online store around the same time.
Plus, the trailer is going to be featured on "The New Face of Fear Vol. 1," a DVD compilation of trailers from independent horror and suspense movies that's being released by Urban Chillers.
There will also be an article in Issue #18 (due to be released in late March) of the comic book "Proof" published by Image Comics, and a preview clip has just been posted on eerietube.com, a hip new space where you can check out the latest in horror and sci-fi news, as well as view original content directed by some of horror's most innovative directors.
The clip can be found here: http://www.eerietube.com/bigfoot.html
And for more data on the film itself, check out the two following links:
http://www.southernfriedbigfoot.com/
www.myspace.com/southernfriedbigfoot
Posted by Nick Redfern at 11:56 AM