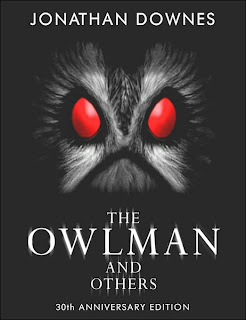 Just recently, there has a been a veritable rash of high-strangeness concerning Owls and England's Owlman.

For those who aren't aware of the saga of the Owlman, check out this link at Kithra's Krystal Kave for the lowdown on the winged-monster that loomed out of the woods of Cornwall, England in the 1970s. And I also recommend a full reading of good mate Jon Downes' The Owlman and Others.

But what about these new developments? Well, for me at least, it all began on Sunday December 5, when along with Greg Bishop, Adam Gorightly, Andy Colvin and several other friends and Forteans I headed out to Giant Rock, California (which, as some of you may know, is a legendary locale in UFO Contactee lore), where I photographed this spray-painted image (below) that was tucked away on a rock-face opposite Giant Rock. 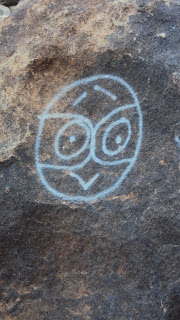 And, Andy Colvin, of course, is the author of the acclaimed series of Mothman's Photographer books on what many might say is the US equivalent of the Owlman - namely, Mothman. An odd coincidence. But this was only the start of things. 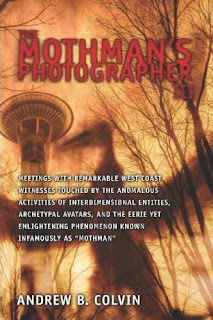 Then, on December 20, Mike Clelland penned this intriguing owl-connected story at his Hidden Experience blog, which - as you'll see when you check out the Comments section to the post - has a link to the aforementioned Andy Colvin! 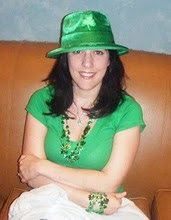 "As with every Christmas season, I have been receiving books I've requested. As with every day of the year, I'm already behind on books I have been intending to read. I'm currently undertaking everything Orson Scott Card has ever written, but because I'm kind of a slow reader due to some degree of attention deficit, that will likely take me a couple years.

"Two weeks ago, I was concentrating my energies on Ender in Exile. Richie had just bought OSC's latest (Pathfinder), so that was next on my list, followed by Anne Rice's latest angel book. That would take up the next three months for sure, and that's not including my plans to continue reading The Ender series with my uncle.

"Suddenly, for no reason I can identify, I dropped everything and began reading The Owlman and Others by my friend Jonathan Downes. Why in the world I chose now, halting my already ambitious reading plans, to pick up this book that had been in my possession for two years is mysterious to me, but why I would choose the Christmas season to immerse myself in the part of cryptozoology that deals with the more sinister side of the unknown is even stranger. (The Owlman is the British version of the Mothman.)

"Richie and I are presently at my mom's for the Christmas holidays. Two days ago (and two weeks into my Owlman book) we received a phone call from MUFON (Mutual UFO Network) for whom we are field investigators. This was an unusual case they were assigning us to: an apparent man-bird sighting in San Antonio. MUFON does not typically address cryptid sightings, but a lady who, with her husband and son, had seen a giant man-bird flying over her neighborhood back in April had just decided to report it to MUFON.

"I find it nothing short of bizarre that the report this of sighting -- the first of its type that has ever come my way -- would occur the very time I had chosen, for no known reason, to read a book on this very thing. I cannot believe this is coincidence. As George Noory says, there is no such thing." 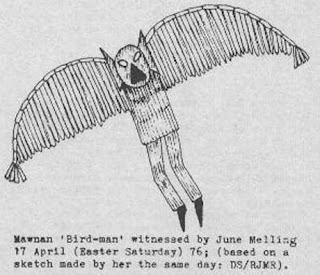 As for the report that Naomi and her husband Richie received, here it is:

"When I saw this I was stunned and stared at it trying to figure out what it was and then I saw it wasn't anything Ive ever seen. I ran into the house and yelled at my husband and my grown son to get out here quick. They came but seemed like forever and they looked and saw it too. When they saw it they thing was like the a few streets over and then disappeared behind the big trees. When we saw it we all said that no one would believe us; but I have recently been talking about it because it has bothered me so much.

"I lived in this neighborhood all my life and I can remember of three UFO sightings since I was five and all the sightings were in this neighborhood or around Stinson Field airport. I never came forward about them because people think ya lost your ever loving mind until recently when others Ive spoke with shared their experiences.

"I have other stories but this one is the most recent and I was wondering if anyone has ever seen this thing. It is silent like it was a glider but I could see the body was exactly like a man a very large man. Thank you for listening to me and I hope you don't think we have gone mad too. I called my daughter and told her afterwards and that's what made my mind up to stay silent. I had my darn cell on my the whole time and not once thought of taking a picture it happened so fast and I'm not that savvy on the cell." 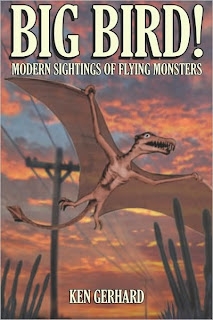 The location is interesting, as San Antonio is the home of Ken Gerhard, author of the excellent book, Big Bird! which deals with sightings of anomalous, winged monsters in the United States and elsewhere. It so happens that the foreword to Ken's book was written by Jon Downes - author of the definitive book on the Owlman - The Owlman and Others.

But, still the weirdness is not over...

On December 24, at his Luminosity blog, Dan Mitchell posted his very own, and highly Fortean, story of the owl kind (here's the link).

And only three days after that, at her Animal Forteana blog, Regan Lee wrote this article, that I urge you to check out, and that also mentions the Owlman.

What all of this means, I have no idea. You may say I'm simply picking up on threads that have no connection to each other, beyond the limited brief time-frame in which all of the above data surfaced. But, I have learned over the years that life is not quite as simple as that, and where synchonicities occur, there's usually a reason involved.

The trick is to understand what all of these synchronicities of the Owl and Owlman kind mean. I suggest that, for right now at least, we continue to scan the Net for further developments, and the skies for further marauding Owlmen... 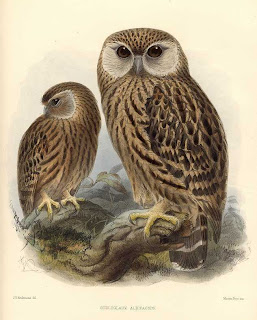 I had posted, just a week or so before all this current thread of owlness, that it seems the owls have gone. Now I see they were just resting.

Is it just me or hadn't Mark Chorvinsky in Strange Magazine completely unmasked the entire Owlman saga as a Doc Sheils hoax? None of the original witnesses were ever identified and everything - everything - came via Doc. Even the sketch on the page here says source: DS! I know there are later witnesses, but they are rare, and not surprising given the Owlman's appearance in most Fortean books over the last 20 years. I'd be interested if anyone could show me documentation that the original sources of the story are real people and not connected with Doc. I have this feeling that many UK Forteans simply like the idea of the Owlman despite the very shaky basis for its existence in ANY dimension! The world is weird enough - we don't need hoaxes confusing things even further. Cheers Paul C from Oz.

Yeah, questions have been raised about the original Owlman witnesses, and Chorvinsky did indeed point a finger at Sheils.

However, this is where it gets tricky, because there certainly are additional witnesses who spoke of seeing the creature, who had no link to Sheils.

Have you read Jon Downes' book on the whole affair? If not, I'd recommend it, as it's an excellent study of the entire Owlman phenomenon, and addresses all the different angles, claims, Chorvinsky etc.

The 30th anniversary edition of the book is the definitive one, as it contains a lot of updates and new data not contained in the original.

Lemme add that I used to see Johnny Ramone at my corner grocery store in NYC during the 1980's. Nothing to do with owls but these are details that should be important to Nick.

I have been trying to get more info on the owl man, because about 10 years ago I had a lucid type dream where I lifted through the storm clouds and came to be looking at a creature that looked like an owlman. He had a cloak like an owl. His face seemed invisible except for his beak mouth and red glowing eyes which were trying o hypnotise me. I pulled my gaze away when I realized this was happening and awoke feeling very strange.