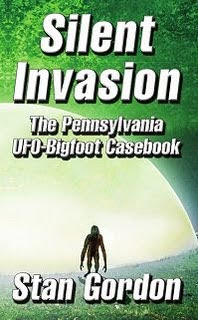 From Stan Gordon, author of the Bigfoot/UFO book, Silent Invasion:

It is with great sadness that I am making you aware, that my longtime friend and research associate, George E. Lutz, 89, passed away on December 18, 2010. George and I began to investigate UFOs, Bigfoot, and other strange incidents here in Pennsylvania during the early 1970’s. He was an avid outdoors man, hunter and fisherman. Lutz was also a former Air Force pilot, and retired as a major in the Air Force Reserves.

George was a kind and friendly person, and we became very close friends during the many years that we spent together. We spent many days and nights searching for evidence of the strange occurrences that were constantly coming to our attention. His experience and background gave credibility and understanding into the many strange incidents which we investigated together. Lutz was a member of the investigation team that responded to the classic October 25, 1973, UFO-Bigfoot incident outside of Uniontown in Fayette County. I will miss George immensely.

The viewing for George E. Lutz, will be on Wednesday at the James E. Lindsay Funeral Home, 3343 Route 130, Harrison City, from 9-11 am. The funeral services are scheduled the same day at 11 am. Interment will take place at the Twin Valley Memorial Park in Delmont. Donations are requested to the Westmoreland County Food Bank.
Posted by Nick Redfern at 10:17 AM