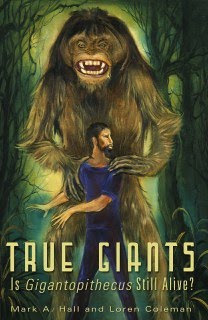 The much-anticipated new book, True Giants: Is Gigantopithecus Still Alive?, from Mark A. Hall and Loren Coleman, has just been published by Anomalist Books.

Here's where you can find out more about what looks to be a great new book, and here's a complete run-down of the contents, courtesy of AB:

Do giant primates larger than gorillas, taller than Sasquatch and Yetis, still exist in the remotest corners of the globe? Famed cryptozoologists Mark A. Hall and Loren Coleman join forces to share their knowledge of this unexplored and neglected topic in cryptozoology.

Bigfoot researchers have long been mystified, even embarrassed, by reports of giant hairy apes larger than Bigfoot, and as a result eyewitness reports of what Hall and Coleman call True Giants have never been fully considered in the broader zoological context. Reviewing the evidence found in traditions and footprints, folklore and sightings, the authors of this groundbreaking volume present for the first time in one place the wide-ranging argument for the possible survival of a giant species of primate that we know lived on Earth for millions of years.

Preface: The Story Behind the Cover
Being the frightening encounter of one Captain Mokhtar Mohamad and his wife with an Orang Dalam, a True Giant.
Introduction
New evidence that humans were not alone. Cryptozoologists as folklorists. A modest attempt to capture the myths, legend, and folklore of the True Giants.

1. The Universal Giant
Tales of storybook giants are global. A broader basis in the natural world for True Giants. The reasons for the lack of investigations and ignorance of their existence. Survival of Gigantopithecus in an era of Homo ﬂoresiensis and other new homin discoveries. Mountains around the world as homes of the True Giants. Their general physical description.

2. The Earliest True Giant was Gigantopithecus
Four categories of evidence: traditions, consistent appearance, footprints, and fossil remains. Gigantopithecus vs. Gigantanthropus. Finding Giganthopithecus. The heights of the Giganthopithecus and True Giants. More about their tracks. The migration issue. Conﬂict with humans. Schism between the species. Cannibalism. Remoteness.

11. The World of True Giants
Structure of the True Giants. Communication skills. Mobility. Dangers to True Giants. How they have changed. Lifestyle. Eating habits. Habitations.

12. The Future of True Giants
What can we do about True Giants? George Papashvily. The Narts. Yel’tso. Other traditions. Ethno-known.

Acknowledgments
Appendix A: Telebiology
How to study giant primates without harming them?
Appendix B: What Scientiﬁc Name For True Giants?
Good questions have complex answers.
Appendix C: Giant Bones
Where are the bones? Where are the skeletons? Where are the skulls? Are there any easy answers?
Appendix D: Giant Skulls by Ivan Sanderson
What did the late cryptozoologist have to say on the question of giant skulls?
Appendix E: The Toonijuk by Ivan Sanderson
What do the Inuits and Eskimos know about True Giants?
Appendix F: The Teeth of the Dragon by Eric Pettifor
What is the standard anthropological view of Gigantopithecus?
Appendix G: Meganthropus: Giant Man From Old Java
Besides Gigantopithecus, there exists in the fossils of Asia, another primate that has been problematic for paleoanthropologists. Might this species be True Giants?
Sources
About the Authors
Posted by Nick Redfern at 5:18 AM