Over at the Magonia blog there's a good, solid, new review of a recently-published book on the infamous Beast of Gevaudan. Here's the link. Which reminds me (kind of!) to tell you we had a coyote run down our street Tuesday night - at high speed - as the storms hit! It's very rare indeed that we see coyotes right here in the heart of the city - and at only 7PM.
Posted by Nick Redfern at 7:51 AM No comments:

Exposed, Uncovered, and Declassified: Ghosts, Spirits, & Hauntings, Am I Being Haunted? is a soon-to-be-published collection of writings that includes a chapter from me on spectral animals - some of a distinctly cryptozoological nature. For more information, click right here!
Posted by Nick Redfern at 1:35 PM No comments:

There's a new report of the Loch Ness Monster...except that it's not that monster. It's this one!
Posted by Nick Redfern at 9:45 AM No comments:

Crypto and the MIB

As The Real Men in Black demonstrates, Mothman, the Loch Ness Monster, the Chupacabra, and perhaps even the legendary "Thunderbird Photograph" have attracted the attention of the MIB. And, in a real scoop, I detail in my book the very creepy MIB encounter of legendary cryptozoologist, Loren Coleman himself...
Posted by Nick Redfern at 6:23 AM 4 comments:

No, that headline is not a joke! As this new story from the BBC shows, a wallaby has been captured safe and sound in the south of England.

Actually, although it's certainly not something you see every day, there's nothing overly unusual about wild wallabies in Britain. Yes, there are a number of interesting stories relative to how and why they are here. But, aside from being distinctly out-of-place and good fodder for the news, there's no real mystery.

As some of you may know, I write a regular, weekly column for Mania.com titled Lair of the Beasts. One of those columns (of March 2009) focused on this very issue of wild wallabies (in fact, whole colonies of them) seen roaming around various parts of the British Isles.

Here's the link to my Mania article - and many thanks to Kithra for alerting me to this story.
Posted by Nick Redfern at 6:52 AM No comments:

Mothman on the Move?

The good folk at The Anomalist note:

New Mothman Sightings Phantoms & Monsters: Last summer a Mertztown, Pennsylvania, man and his son reported seeing something very strange fly past them in a heavily wooded area. "The body was 5-6 ft in length easy, wing span was 25-30 ft easy, no feathers, bat like skin, jet black, and a 4-5 ft skinny (rat or dragon) like tail that stuck straight out." And on May 9th of this year, a construction worker in New Miami, Ohio, reported seeing a creature with "a wing span of at least 12 feet and was jet black."
Posted by Nick Redfern at 12:46 PM 1 comment:

A Bigfoot of the White Kind

About ten years ago - and shortly after I moved to the US - I received a report of a white-colored Bigfoot from, of all places, the plains of West Texas! While such reports may be relatively infrequent, they're certainly still being filed, as this latest one - noted by Loren Coleman at Cryptomundo - demonstrates.
Posted by Nick Redfern at 10:08 AM No comments:

As I note in a new post at Mysterious Universe, not all of Britain's legendary tales of glowing-eyed, phantom black dogs date from centuries long gone...
Posted by Nick Redfern at 12:58 PM No comments:

Although the stories of the so-called Hell-Hounds, or Phantom Black Dogs, of Britain very often provoke imagery of cases strictly from centuries long-gone, such is actually not the case at all. In my latest post at Mysterious Universe, I note that profound reports have been made in both the 20th and 21st Centuries.

And don't forget: Beware of the Dog!
Posted by Nick Redfern at 1:51 PM No comments: 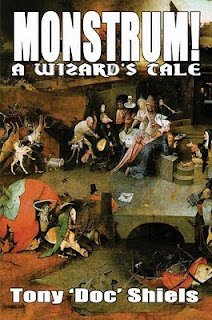 As some of you may know, CFZ Press have just republished an absolute Fortean/crypzoological classic book: Tony "Doc" Shiels' Monstrum! Here's my review of the new edition. I don't exaggerate when I say the book is essential reading!
Posted by Nick Redfern at 12:24 PM No comments: 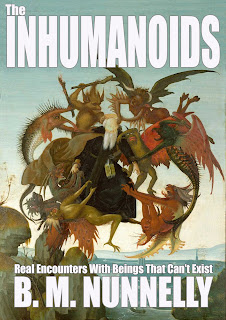 New from CFZ Press, Bart Nunnelly's The Inhumanoids (which I can say, having written a foreword for it, is an excellent book!).

Inhumanoids are creatures or entities that have some type of human characteristic but are not human at all. Even though they sometimes appear as 'less than human' they are quite beyond the normal sense of the word and possess a troubling array of supernatural powers to prove the point. Some are true 'bi-forms', curious anthropomorphic mixtures of human and animals, while others manifest themselves in guises that one might pass by on the street and never give a second glance. From the smallest fairy to the tallest giant and every form in between, these inhumanoid beings, in all their myriad forms, have been with us since the beginnings of recorded history and beyond. Every culture knows the inhumanoids quite well. Since the dawn of time man has encountered such creatures, which simply cannot be explained away using conventional zoological science. In fact, all that we 'know' of mainstream biology, zoology and anthropology scream in unison that creatures like 'The Spottsville Monster' cannot possibly exist at all. Yet people see these beings, and a host of others of the same bizarre ilk, much more frequently than many would suspect. In researching this book I was struck by the sheer number of alleged inhumanoid encounters reported to have taken place: thousands upon thousands. As a consequence of the sheer magnitude of such data, this work merely attempts to scratch the surface of that very old, long list.
Posted by Nick Redfern at 9:10 AM No comments:

It's not cryptozoology, but it does focus on high-strangeness in the animal-kingdom: my latest post at Mysterious Universe.
Posted by Nick Redfern at 7:51 AM No comments:

Not only does Neil Arnold have something new to say on Mothman (see my earlier post today), but so does Andy Colvin, author of The Mothman's Photographer series of books, as well as his most recent book on the subject, The Mothman Speaks.

Here's Andy to tell you more:

I just wanted to pass on links to some of my recent radio interviews that might be of interest. These cover the gamut and involve recent trends in the media and our Mothy universe.

With Vyz, Alexandra Bruce (author of 2012: Science or Superstition), and Skylaire Alfvegren (of Forteans West) on That Was the Month That Wasn't. This one deals with some pretty serious issues:

With Mike Clelland on Hidden Experience. This has been one of his most popular interviews this year:

The Center for Fortean Zoology's North Carolina-based rep, Micah Hanks, takes a look at the theory that some unknown, or unidentified, monsters of the oceans might really be gigantic eels. Here's the link to Micah's intriguing post.
Posted by Nick Redfern at 10:18 AM No comments:

Mothman in the UK

Neil Arnold tells the curious and creepy story of the Mothman of Hertfordshire, England. It's illuminating to note that - when we look closely - we find stories of strange, winged humanoids all across Britain. Maybe it's time for Neil to pen a book on this very subject!
Posted by Nick Redfern at 10:03 AM No comments: