Kithra turns her attention to the realm of large, black cats - although there's nothing of the "zoo-escapee" type about these! Here's the link...
Posted by Nick Redfern at 1:09 PM No comments:

Loren Coleman with some sad news:

Two individuals associated with the Fouke Monster and The Legend of Boggy Creek film die on April 20th.

A 10-Year Anniversary of the Monstrous Kind

As someone blessed (or cursed!) with a good memory, it occurred to me just recently that the 10th anniversary of a certain weird, creature-caper in central England was looming. And, now that the same anniversary is upon us here is my take on the matter, as described in my latest Lair of the Beasts post at Mania.com.
Posted by Nick Redfern at 10:46 AM No comments:

As you may have noticed, posts here and at my other blogs have been a bit brief and sporadic for the last week or more. It's just the usual stuff: work deadlines. But, things should be back to normal again in a couple of weeks.
Posted by Nick Redfern at 5:00 AM No comments:

Bones and the Chupa

Did anyone else see last week's episode of Bones? It was an entertaining one that focused on the Chupacabra and the presumed death-by-goat-sucker of a certain...L. Coleman! Fortunately, the "L" stood for Lee, not Loren! But, Loren has done a good post on the show, which you can find here. Also, check out his latest news on the saga of the Minnesota Iceman.
Posted by Nick Redfern at 4:53 AM No comments:

This just in from Richard Freeman at the Center for Fortean Zoology:

Russia, or the one time Soviet Union, always seemed to be a step ahead of the west scientifically. They did, after all, get the first satellite into orbit, and the first man in space. They seemed to be forward thinkers and less hidebound and arrogant.

In the 1950s, when the interest in the Himalayan yeti was at its peak, most (though certainly not all) had more or less written off the creature. Not so the Soviets. Russian polymath Dr Boris Porshnev seriously considered the existence of such a creature. Unlike most western scientists, he thought the creature might be a relic hominid - a relative of the ancestors of man - rather than a great ape.

Here I must personally disagree with him on the nature of the yeti, but that is beside the point. He was a scientist with an active interest in the subject.

Porshnev also found out that there were sightings of superficially similar creatures in the Soviet Union. In the Caucasus, the Pamirs, the Tien Chen and other areas were reports of hairy man-like creatures variously known as almasty, almas, dev, gul and many other names. There were records of encounters with such creatures. These seem smaller and more man-like than the classic ‘giant yeti’ of Tibet and the Himalayas. These could, indeed be relic hominids.

In 1958, the USSR Academy of Sciences, on Porshnev's initiative, set up a special Commission on the "snowman" question and launched an expedition to the Pamirs. Although it did not find a yeti or almasty, the Snowman Commission was in existence for three years. It is hard to imagine any other government being so forward looking as to back a cryptozoological organisation.

During its three years, the Commission amassed a huge amount of information on sightings both modern and historical. As far back as the time of Carl Linnaeus the creature had been given the scientific name Homo troglodytes.

During the three years, Porshnev compiled and published yearbooks of information on the ‘snowman’. After the Commission was abolished he continued to compile information. Sadly, none of his books have been translated into English and even in Russia his books are rare, one having a print run of only 180. I have tried to get an inter-library loan of this book from Moscow Library with a view to photocopying it for translation, but I never did receive an answer.

In 1960, Pyotr Smolin began a seminar on the subject at the Darwin Museum in Moscow. This encouraged a second generation of researchers including Dmitri Bayanov, Igor Bourtsev, Alexandra Bourtseva, V.Pushkarev, Maya Bykova, V.Makarov, M. Trachtengerts and Gregory Panchenko.

Now 51 years after the Snowman Commission was disbanded, the Siberian Government are to set up a research institute based at Kemerovo University dedicated to the study of relic hominids.

Officials of the Kemerovo administration in western Siberia have said that organising an institute or a scientific centre would be a logical continuation of research into the yeti.

Dr. Igor Burtsev, director of The International Center of Hominology, will join the brand new research unit if the plans go ahead. He said: "In Russia there are about 30authoritative scientists who are engaged in studying the phenomenon of the abominable snowman."

"All of them will be integrated into this institute. The primary goal is to establish contact with one of the creatures." Recently 15 local people in the Kemerovo region have reported encounters with a 7-foot, man-like beast with black or reddish hair. Most reports come from the Mount Shoria wilderness.

Let’s hope that this time they have more luck and are given more time to find their quarry.
Posted by Nick Redfern at 1:26 PM No comments:

Neil Arnold, author of many books, including Monster! and Mystery Animals of the British Isles: Kent, reveals his Fave Fortean Five...
Posted by Nick Redfern at 12:24 PM No comments:

Ken and the Chupa

Ken Gerhard has a new post at the San Antonio Current that provides a good, solid overview of how the phenomenon of the Chupacabra came to be. Here's the link.
Posted by Nick Redfern at 12:22 PM No comments: 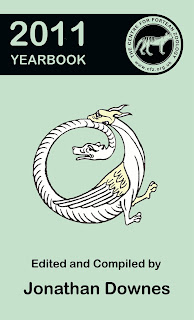 Just like (A) Santa, (B) a re-run of a Morecambe and Wise Christmas show (which will mean nothing to you, unless you hail from the British Isles!), and (C) lots of drunken people singing Auld Lang Syne, the Center for Fortean Zoology's Yearbook is a once-a-year phenomenon.

And, I'm very pleased to announce, the 2011 edition - edited by the capable, ink-stained hands of Jon Downes - has just been published. As always, it provides the reader with a good and varied selection of papers. Here's the full listing of the CFZ's 2011 Yearbook:

TRUNKO: A Trio of World-Exclusives on ShukerNature. Here’s How It Happened! by Dr Karl Shuker

FLOGGING A DEAD HORSE: The Cryptozoological Aspects of the George Edalji Affair by Nick Redfern

INVENTED TRADITIONS AND REGIONAL IDENTITY: The case of the Black Dog of Bungay by Dr David Waldron

IN SEARCH OF THE BOLDON BRAG by Mike Hallowell

- DRAGONS: A LEGEND COME TO LIFE
- GOING UNDERGROUND - MONSTERS THAT NEVER WERE
- WENDIGO: WALKER ON THE WINDS
- THE THING ON THE DOORSTEP: MONSTERS IN YOUR BACKYARD
- THE BOGEY MEN OF THE PHILIPPINES
- THE BEASTS FROM BRAZIL

ON THE ALMASTY AND CENTRAL ASIAN WILDMEN by Dale Drinnon

THE AMPHISBAENA IN BRITAIN AND IRELAND by Richard Muirhead

A NOTE ON FRANK SEARLE AS RECALLED by Syd Henley

ON THE TRACK...OF HELLHOUNDS WHICH AREN’T BLACK! By Neil Arnold

THE CRYPTOZOOLOGY OF POKÉMON (Generations 1-4) by Oll Lewis


If you're in Britain, you can buy the book here. And U.S. readers should click on this link.
Posted by Nick Redfern at 11:23 AM No comments:

Ever been in the back of your car with a bird down some darkened lane when, just as you're getting to the best part, Bigfoot or some other, voyeuristic, motley monster pops up to watch? Well, as Micah Hanks demonstrates, such reports are surprisingly common...
Posted by Nick Redfern at 8:44 AM No comments:

For those who may be interested, here's a link to a brand new interview with me at the WEIRLD site. We cover a lot of Fortean ground, including Bigfoot, and my views on cryptozoology.
Posted by Nick Redfern at 9:59 AM No comments: