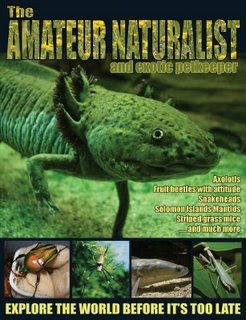 Here's some excellent news from the CFZ's Jon Downes:

"18 months ago we started a magazine called Exotic Pets which did basically what it said on the tin, and covered ummmm exotic pets really. It has been a moderate success, but for a number of different reasons we have decided to knock it on the head.
"However, don't be distraught, because the magazine will live on albeit under a different name. As of issue seven which (I sincerely hope) will go to press on Tuesday, the periodical will be called The Amateur Naturalist.
"To put our reasoning in a nutshell, as far as we are concerned the keeping of exotic animals as pets is only ethical if done in a spirit of investigation, and so rather than publishing a magazine which could be interpreted as merely encouraging people to keep such animals for their novelty value, we are now nailing our ethical colours to the mast.
"However we are delighted to be able to announce that the production values are going to be considerably higher. It will no longer be printed in-house but will be manufactured - like our books - by those jolly nice folks at LightningSource. It will be substantially longer (at about 100pp rather than 60pp) and although there will be a small price hike this will not effect current subscribers.
"And, as we announced with Animals & Men last week, it will be available in two different formats. A perfect bound paperback, and a pdf download (people who buy the former automatically get a free copy of the latter).
"So, all good news then I think."
Posted by Nick Redfern at 11:28 AM