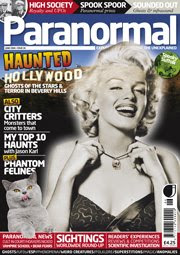 Those of you who have read my book Three Men Seeking Monsters may recall the strange story of one Colin Perks: a somewhat odd (to say the very least) character who claimed to have had close-encounters with a gargoyle-type creature (seen both on the ground and in the skies) in the ancient English town of Glastonbury, Somerset.

Well, for those who are interested: the April issue of Britain's Paranormal magazine (edited by all-round good-bloke, Richard Holland) includes a short account (and accompanying photo) of a strange beast seen in the skies over Glastonbury in March 2007.
The letter-writer tells Paranormal that the beast in the photo seems to resemble a large jellyfish, with long tentacles hanging down - which, indeed, it does.
Could there really be two different types of winged-entity on the loose in historic Glastonbury, or are we talking about manifestations of the same creature - and maybe one that is a definitive shape-shifter...?
Posted by Nick Redfern at 11:19 AM