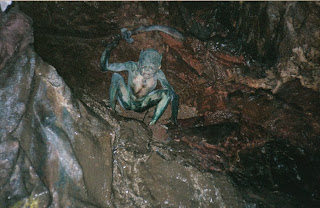 Having read with much interest the Qatar-controversy over at Cryptomundo (concerning various photos of non-cryptids - models, toys and constructs, in reality - being passed off as the real-thing), I'm reminded of this photo which was sent to me around (I think) 1997 or 1998.
Nope, this is no cryptid either. Rather, it's a creation that can be found in a certain, very famous series of caves in England, and which is meant to merely offer a bit of "sword-and-sorcery"-style entertainment to those who visit the caves in question.
But what was interesting was the intricately woven tale that accompanied the picture when it was mailed to me. I forget the precise details now, but it all revolved around the claim that intelligent, sword-wielding cryptids were roaming the many and varied caves that exist deep below the British Isles.
The letter ran to 2 or 3 pages - and was, of course, all complete nonsense. So, if you too have ever been on the receiving end of this photo, just enjoy it for what it is: a piece of man-made entertainment and nothing else!
Posted by Nick Redfern at 10:47 AM

Looks good though! Trouble is, so many 'hoaxes' are so bad that they deserved the bad press. It's difficult to be entetained however when some of the frauds are clearly not good for the crypto community, and I do find it irritating that every fraud is plastered over crypto sites! Why give the hoaxers the pleasure ?

I do understand your frustration; however, if we can actually expose the hoaxers then I think to publicize the data can be quite instructive: to lay the stories to rest; and to ensure that others don't fall for the same story.