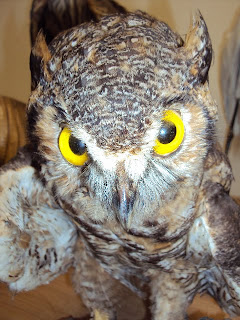 From today's Anomalist we have this intriguing story:

The Mothman of Pottery Mound Graham Hancock. Gary A. David suggests that there are precedents to the late 1960s Mothman phenomenon in the high plain of central New Mexico in about the middle of the 14th century. Archaeologists excavating the Pottery Mound site outside of Los Lunas have found some murals that seem to depict what we today call Mothman. What prompted the depiction of this strange insect-human hybrid? It seems that the night flying hawk moth and the Datura plant may have a lot to do with it. Does this potent psychoactive plant open a dark doorway through which the inter-dimensional Mothman flies toward the light?

How curious that, also this week, we hear news - thanks to Jon Downes - of an apparent new sighting of Britain's cousin to Mothman: the Owlman of Mawnan Woods, Cornwall.

Is something in the air, perhaps? And, yes: I do mean literally!

And, in case you're wondering, the photo above does not show the Owlman! It's an unfortunately-stuffed little fellow my wife, Dana, took a photo of at the Lake Worth Goat-Man event last Saturday. But he does look kind of appropriate for this story, right?
Posted by Nick Redfern at 3:32 PM

There appear to be hundreds of sightings of winged humanoids which could easily be lumped in with the Mothman phenomenon. Trouble is, Mothman became too restricted as a mystery as soon as it was given the horrendous 'Mothman' tag.
West Virginia, most parts of the US, and in fact the world, harbour similar aerial anomalies, unfortunately, only some make legendary status, which in turn is often a bad thing as the lesser kmnown critters get ignored.