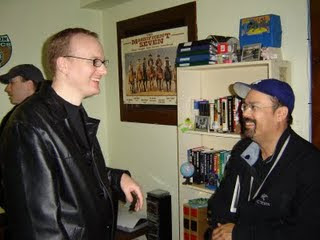 The news that good friend, fellow author and Fortean writer and researcher Mac Tonnies has passed away suddenly at the age of only 34, is tragic, mind-numbing and overwhelmingly saddening.

It’s difficult (as it always is in such situations) to put my thoughts and feelings into words. But, my first thoughts are, of course, with Mac’s family at this terrible time.

I first came across Mac in 2004, when Paraview-Pocket Books published his book, After the Martian Apocalypse, which is a very good, and highly balanced, study of the Face on Mars controversy. I interviewed Mac not long after the book came out for the now-defunct Phenomena Magazine, and we stayed in touch, and soon became friends - albeit at the time purely by email and sometimes by lengthy night-time phone-calls, during which we would chat about Forteana, music and more.

Then, in late 2006 - at Paul Kimball’s New Frontiers Symposium in Halifax, Nova Scotia - we got to meet up, along with Greg Bishop and several others for a weekend of Forteana, UFOs, Cryptozoology, and general high-strangeness.

Needless to say, it was a fun few days, and I have a lot of good memories of Mac from that gig - he gave a fine presentation, everyone had a great time, and there was a cool vibe in the air. After that, me and Mac continued to stay in regular contact. Indeed, only a couple of months ago I interviewed him for an upcoming project, about which he was very excited - and now he’s gone; which I am still finding hard to believe and accept.

Mac was a great thinker and a thoughtful individual. He was a person with much to say and who had the skills to say it, too. And, with the manuscript of his planned book The Cryptoterrestrials nearly completed, I truly believe that Mac was about to come into his own in the Fortean field on a very large scale indeed.

He was also my friend, and I’ll greatly miss him.

Mac was taken far too early; so let’s always remember the man, the friend, and the work that he left behind. That’s really all I want to say right now.

PS: The photo above shows Mac (on the left) with Greg Bishop, sharing a laugh about something at Paul Kimball’s 2006 gig. This is the Mac I will remember.
Posted by Nick Redfern at 7:48 AM

After the initial shock sank in, and the sadness is beginning to recess a bit, some few disturbing thoughts are beginning to creep in my head.

The thought that Mac will inevitably join the ranks of "mysterious deaths" of UFO researchers that are coated with myth and conspiracy theories.

Maybe he would have found that flattering...

Yeah, it's a big shock indeed.

I hope that doesn't happen re the conspiracy theories, and that we can instead celebrate and remember his life, and not have some of the more paranoid characters in the field make outlandish claims about his death.

"...and not have some of the more paranoid characters in the field make outlandish claims about his death."

Well Nick, we have a saying in Mexico: that's asking pears to the elm tree :-/

In the meantime, I'm 100% with you in celebrating Mac's life. Somebody should start making the "Mac Tonnies Award" for Fortean research or something!

My condolences of the passing of one of the Great Ones. RIP.

I don't mean to be "inapropriate," but how did exactly Tonnies died?

I have googled his name and nothing has come out about his name.

I guess it has not been determined yet, right?

Anyway, I agree with you, Nick (and RPJ) that this is a tremendous loss.
You will be missed, Mac.

Nick, I have a film we made with Mac - a TV show called Supernatural Investigator, an episode on life from other planets. I spent time with Mac in 2008 filming that, and it is the only production that features him as far as I know. Would love to get it online. Glad to make that happen if someone would like to host it.

This is so very depressing. I live in Kansas City and just last week I was thinking about asking him out for a beer as we had never met. My thoughts go out to his family. So sad.

I have spoken with Mac's mom. He died last sunday night - in his sleep. It was his heart.

Thanks to all of you for the comments and condolences.

Mike: Mac told me about this show. Yes, it would be great to see that online as a lasting legacy.

Thanks for that - I noticed his last posting was Sunday night, so is what I suspected. Talked to him the Friday.

I will digitize the show and post to Youtube I suppose would be the best option. It's gonna be hard to watch.