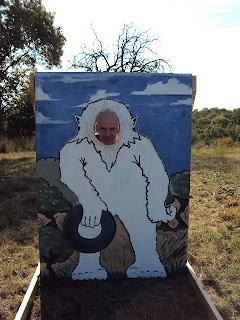 Back in the summer of 1969, something very strange allegedly happened at Lake Worth, Texas. As the stories, legends and tales told it, a wild creature was seen roaming the darkened woods and roads of the lake, striking terror into those that crossed its diabolical path.

Witnesses reported seeing a big, fast-moving beast that jumped on their cars, and that flung a large tire at a group of people who were in the area trying to find it. The cops scoured the woods for any evidence of the monstrous thing, and the local media was highly entertained in the process.

And thus was born the legend of the Goat-Man.

Since then, the tales of the Goat-Man have become legendary in and around Lake Worth. And, it must be stressed, the legend has as many disbelievers as it does believers. For some, mistaken identity, hoaxing and hysteria can explain everything. Others have concluded that Bigfoot was to blame; while there are those (like me) who find the whole story very intriguing, but who have not formed any strong opinion one way or the other - mainly as a result of the inevitable passage of time, and a lack of hard evidence one way or the other.

But, that hasn't prevented the Goat-Man from thriving.

Indeed, he, she or it has been the subject of a book (The Lake Worth Monster by Sallie Ann Clarke); a couple of documentaries; numerous newspaper stories; and even a song or two. And that's not all: this past Saturday saw the first ever Lake Worth Monster Bash held at the lake - and right in the heart of Goat-Man Territory. Or, as it's known today: the Fort Worth Nature Center and Refuge.

Well, living only about 20 or 30 minutes away meant I just had to attend! And I'm glad I did, as a fine time was had by one and all - even my wife, Dana, whose interest in cryptozoology is (to put it diplomatically!) "minimal," had a great time!

I have to confess that when Dana and I set off for the lake around 9.00 a.m. on Saturday morning, I did wonder if anyone would actually show up. After all: how many people would want to learn about a 40-year-old story of a beast described as half-man and half-goat?! Actually, the answer is: quite a lot! Indeed, by around 11.00 a.m., the car-park was practically full, and the crowds were out in force.

And there was much to do and see, too. Recognizing that the Goat-Man was (and is) an integral part of Lake Worth's history, the FWNCR put on a great event. Craig Woolheater and the Texas Bigfoot Research Conservancy were there, highlighting the work of the group. And Sean Whitley, writer, director and co-producer of Southern Fried Bigfoot - an excellent documentary on Bigfoot in the American South - had a table promoting his film.

For those who wanted to get into the spirit of the Goat-Man legend, there was the "Throw Like the Pro - Tire Hurling Contest," where people could try and recreate the Goat-Man's legendary tire-throwing caper of '69. There was a hike to Greer Island - a small body on the lake where the beast was supposedly seen; and a trip to the quarry where the tire-throwing incident occurred.

For the children, there was a reading of the book Cam the Man Hunts for the Spooky Goat Man, written by local author Stephanie Erb; and a chance for the kids to build their own monster at the Kids' Monster Headquarters.

In addition, there were some very welcome stalls and displays that highlighted local wildlife, including exotic insects and much more. And there was a group, too: The Skip Pullig Band, who played their new song, titled (what else?) The Goat-Man.

And it didn't end there: Sallie Ann Clarke has loaned her collection of Goat-Man memorabilia to Lake Worth's Hardwicke Visitor's Center, which has a whole section devoted to his Royal Goatness, and which is well worth seeing. Plus, canoe tours around Greer Island; a chance to feed the island's resident population of Bison; and hayrides around the lake were all part of the day's events.

In other words, this was very much a fun, family-oriented, interactive experience that paid homage to the original legend of the Goat-Man; but one that also allowed people to learn about the important work of the FWNCR. And it got the kids away from the computers and the TVs for a while, and let them see that there is a real world outside, full of fresh air, mysteries, adventures and much more.

All in all, it was a cool, informative and entertaining day - and here's looking forward to the next Goat-Man gig!

Nick - great write-up! The Monster Bash was indeed a lot of fun, and it's nice to see that this local legend is being kept alive.

For those interested, I did post a number of photos to the Southern Fried Bigfoot MySpace page showing the Monster Bash, the history of the Lake Worth Monster exhibit, and the Nature Center itself. You can also find some great photos on the Facebook fan pages for both the Texas Bigfoot Research Conservancy and "Southern Fried Bigfoot."

It's sort of interesting to me that the Lake Worth Goatman was a white or at least pale color and that the 'goatman' reported here in 1973 (though we can't tell exactly where it was at) was said to have a white mane.

Sounds like a terrific tribute! I wish I could have made it. The Lake Worth Goat Man, like Big Bird, is one of Texas' iconic cryptids.