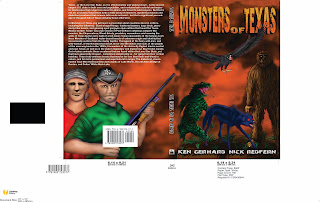 Coming very soon from Jon Downes and the good chaps at CFZ Press is a new book from myself and fellow creature-seeker, Ken Gerhard titled Monsters of Texas: Strange Creatures of the Lone Star State. There's no release date as yet, but it will be available in the next few weeks. Meanwhile, the back cover blurb for the book reads thus:

"Texas - or the Lone Star State, as it is affectionately and widely known - is the second largest U.S. state in both area and population, and contains both colorful and majestic landscapes that range from desert to plains, and forest to wild canyons.

"But that is not all: all across Texas there lurks a wide array of monsters, mysterious beasts and diabolical creatures that science tells us do not exist – but that a significant percentage of the good folk of Texas certainly know otherwise.

"In Monsters of Texas, you will learn a great deal about countless bizarre critters, including the following:

"Giant winged-things: feathered batmen, huge birds, pterodactyl-like beasts, and glowing-eyed gargoyle-style entities that haunt the Texas-Mexico border; Texas’ very own version of Puerto Rico’s infamous vampire-like monster, the Chupacabras; Blood-thirsty, predatory werewolves said to be roaming the wilds of Texas by the eerie light of a full moon; Texan equivalents of the famous Loch Ness Monster of Scotland: water-based beasts of unknown origin and identity that occasionally surface from the murky depths; The legend of the hairy wild-man, and wild-woman, of the Navidad that struck terror into the minds and souls of the people of the area way back in the 1800s; Encounters of the distinctly Bigfoot kind in central and east Texas; as well as in the state’s legendary and mysterious Big Thicket woods; Out-of-place animals: those creatures that are found within the Lone Star State, yet that have apparently strayed – sometimes inexplicably so - far away from their normal habitats; Those truly ominous beasts that may be far less than flesh-and-blood in nature, and far more paranormal and supernatural in origin; The diabolical, cloven-hoofed Goat-Men that haunt the dark woods of Lake Worth, the old Alton Bridge at Denton, and Dallas’ White Rock Lake."

Keep watching this space, and I'll update you just as soon as I have more information on the publication date.
Posted by Nick Redfern at 6:54 AM