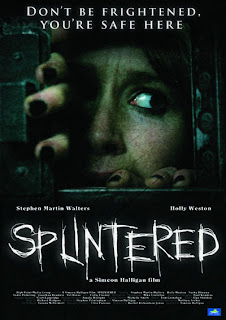 A couple of nights ago, I watched a highly entertaining and atmospheric horror-film titled Splintered. Directed by Simeon Halligan, produced by Rachel Richardson Jones, and starring Holly Weston, Stephen Martin Walters, Sacha Dhawan and Sadie Pickering, it's one I definitely recommend.

Something strange and monstrous is prowling around the fields and woods of North Wales, and violently slaughtering sheep in the process. Sophie (played by Weston) is a teenager with a deep fascination for all-things weird, and persuades a group of friends to accompany her on a road-trip-style quest to learn the truth of the strange creature.

Inevitably, things don't go well, and mayhem, carnage and death follow, as the intrepid team of adventurers seek out the beast. With strong performances from the cast and a definitively spooky setting (the proverbial mysterious, huge, old and deserted building), Splintered is full of all sorts of twists and turns, and keeps you guessing until the very end.

Is some form of vile creature on the loose? What might it be? Animal? Man? Or something else?

I won't spoil the story for you; but if, like me, you watch a lot of horror-films, and also have a deep interest in legends of strange creatures roaming the countryside, you'll definitely enjoy Splintered!
Posted by Nick Redfern at 8:21 AM

Yahoo! I can't get enough of beast in the woods themed movies. Thanks!