Mystery Animals of the Northern Isles 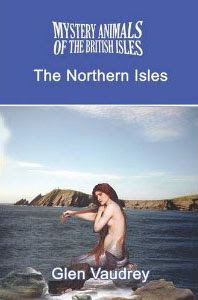 Good news! Glen Vaudrey has a new book out right now. It's the latest in the Center for Fortean Zoology's on-going series of titles that fall under the banner of Mystery Animals of the British Isles.

Glen's new book covers the Northern Isles, and here's Jon Downes to tell you more about it:

"Glen's second volume in the Mystery Animals of the British Isles series is now available. As Glen writes in his Introduction: 'My aim with this book is to introduce you to the many wonderful mystery animals that have put in an appearance in the Northern Isles over the years, from the darkest days of the Middle Ages right up to the mdoern day. For those unfamiliar with the term, the Northern Isles is used here to describe the island groups to be found north of mainland Scotland."

If you're in the UK, you can purchase Glen Vaudrey's Mystery Animals of the British Isles: The Northern Isles at this link. And US readers can buy it right here.
Posted by Nick Redfern at 7:09 AM