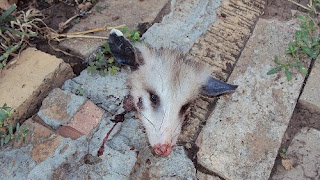 Something weird has been going on in our back-garden (or, back-yard, as it's called in the US!) for some time now.

And, it's probably a good idea to bring it to people's attention, as it's still on-going.

About three weeks ago, I found a decapitated mole in the grass, which I thought was kind of odd, and which Ken Gerhard saw when he came to visit shortly afterwards. Then, about two weeks ago, I found a large, skinned bone on the lawn - yep, picked entirely clean of meat.

But, there was far more - and much worse - to come, as the photo above shows.

Last Saturday morning, me and Dana were sitting outside when D suddenly gave out a huge scream and pointed to a paved area about eight-feet from where we were sitting.

As the photo graphically shows - and as became clear when I went over to take a close-up look at it - it was the head of a possum, which had clearly been pretty savagely torn or bitten off.

And, it was made all the more strange by the fact that this is the precise position the head was in when we found it. In other words, I didn't carefully position it for the photo. In fact, handling the ant-infested head was the very last thing I wanted to do!

But, what I can say for sure is that twice in the past year we have seen a Coyote in the street outside our house. The first time was in June of last year, when we came back from my mum's funeral in England and it raced across the road in front of us, around 8.30 at night.

The second time we saw it was during a very violent thunderstorm in May or June of this year, when - again - it was racing along the road outside our home.

Plus, although we live in a city (Arlington, Texas, just outside Dallas and Fort Worth) behind our house is a huge stretch of field that extends for hundreds of feet (both length and breadth-wise). The ideal place for a predator, perhaps.

I'm inclined to think the Coyote was the culprit (and that the mole and the bone issue were part of its actions too), but if you have any other ideas, let me know...
Posted by Nick Redfern at 8:56 AM

Do you have any bobcats around there? That would be my guess.

That is crazy! You're probably right about the coyote, but wow. Never thought I'd come across a severed head on my blog list tonight, haha.

Set up a game cam

Autumn:
Yeah it is, very!

Lesley:
I did wonder about a bobcat, as one of the things I forgot to mention in my post is that we have a 6 and a half foot-high wooden fence that surrounds our entire yard. Could a coyote actually climb that, and carry a possum body at the same time?

Jason:
LOL, strange things happen in the Redfern yard, such as this:

Cullan:
That's actually going to be happening next week.

I don't think coyotes can climb fences at all. We have bunches of coyotes around here and none of them have ever climbed my wall or fence. I did lose one of my cats to a bobcat a few years ago and the remains of my cat was much like your photo. We are sure it was a bobcat because of the footprints.

The urine smell could be dog/coyote or cat. Have a look around the field and see if there's a trail, it's likely the possum was killed in the garden the head removed, blood lapped away, rest of body taken back over the fence. In the UK there tends to be fox and domestic cat heads turning up, which suggests a large predatory cat.