Diary of a Monster-Maker! 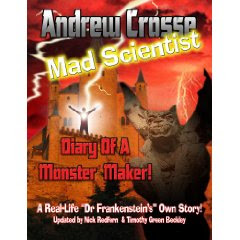 I do quite a bit of writing (such as introductions, etc) for Timothy Green Beckley's Global Communications publishing company. And, right now, Tim has just published a new title that will appeal to anyone with an interest in weird creatures, monsters and more.

Titled Andrew Crosse: Mad Scientist - Diary of a Monster Maker!, it tells the fascinating story of a man, a monster, a famous novel, and much, much more.
I have written the Introduction to the book, and here's Tim to tell you more:
He was known as "The Thunder And Lightning Man. . ."
Was Andrew Crosse (1784-1855) a real life Dr Frankenstein?
Did he create the building blocks of life in his laboratory? Or was he delusional? Or perhaps even a total fraud?
His contemporaries in the scientific community were puzzsled by the very nature of his experiments. And while the eye does not deceive, they were unable to duplicate his findings and reproduce under controlled conditions the striking life forms that were plainly visible and clearly moving around Crosse's laboratory table.
To the farmers living in the area surrounding Crosse's palatial Fyne Court, he quickly became recognized as a heretic dabbling in dark areas that led him to be on the receiving end of a significant number of irate letters from God-fearing folk who summarily and loudly accused him of blasphemy, or even trying to replace their God as the ultimate creator.
The contentions of the nearby country folk were only compounded by Andrew Crosse's ability to seemingly capture bolts of lightning and direct them through a mile long coil of copper wire that was suspended from poles and trees all around his estate. Events reached a boiling point when Crosse started to receive anonymous death threats. There were those who firmly blamed him for a failure in the year's wheat-crop; and there was even a demand that an exorcism of the whole area be undertaken in the surrounding green hills.
Here, in his own words, Andrew Crosse describes in great detail his life and times and the experiments that caused such a gret controversy in his day -- and continue to frighten and bewilder us even now! In a breathtaking update paranormalist Nick Redfern takes us behind the scenes and actually describes Crosse's relationship with the creator of the Frankenstein novel, Mary Shelley.
Posted by Nick Redfern at 6:50 AM