This is great news: early next year, Anomalist Books will be publishing Lyle Blackburn's book, The Beast of Boggy Creek: The True Story of the Fouke Monster.

It's about time that we get to read a full-length, definitive study of one of the United States' most legendary man-beasts!

I've met Lyle on several occasions - most recently when me, Ken Gerhard and Craig Woolheater hung out on a Sunday night in the cool house in which Lyle and his wife Sandy live, which is an incredible shrine to all-things monstrous! 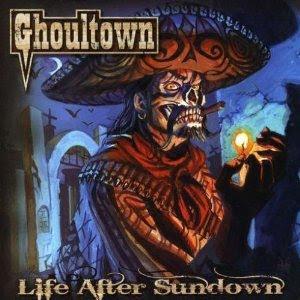 Lyle is also the singer in an excellent band called Ghoultown, whose Life After Sundown CD I'll be reviewing shortly.

The picture above shows Lyle at the Oklahoma-based Cryptid Fest that me and Ken Gerhard spoke at in September.
Posted by Nick Redfern at 8:25 AM

I will definitely be getting that book. Thanks for the heads-up.

Autumn:
Yeah, it's a book that definitely needed to be written, should be a good one!

That's annoying, I was planning on writing a book on it! About 1998 a guy who, bizarrely, lives about a mile from me, in Kent, UK, bought the rights to the film because it never got a proper release. He ended up friends with Smokey Crabtree and gave me some exclusive photo's of the area and also one of a creature that was found near the creek. Be interesting to see what the book covers and if the photo is in it. I'd say Smokey's book is the best account of the monster.

Well, Roswell has been the subject of 20-plus books, and the JFK assassination - I don't know how many!

So, I think there's always scope for someone to do their own work on a particular subject without it just a rewrite of someone else's.

Indeed, maybe the publicity from Lyle's forthcoming book will open the door for much more data that can be explored.

So, in that respect, maybe this doesn't affect your own plans.

Looking forward to this. The events depicted in the movie were unfolding, & receiving (IIRC) front-page cover in the nearest newspaper of size, when I was in 7th grade one county over in rural Arkansas.

These guys rock! Thanks for putting me onto a great band, and I expect a great book!