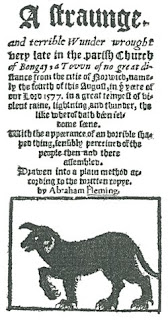 Over at her Mysterious Haven blog, the CFZ's Michigan rep and good friend, Raven Meindel, delves deep into the legends of dastardly, glowing-eyed, paranormal hounds. As Raven says:

"From the haunting Moors of England to the distant forests of the Scottish Highlands and the mysterious Isle of Man in the Irish Sea, the legends have been passed down for generations. Stories of malignant, ghastly looking black hounds with glowing red eyes that roam the wastelands and plod through ancient forests in the night, baying and howling and bringing with them a supernatural feeling of ill will and bad omens. Locals are often frightened to the point of staying in doors for days on end and crossing themselves with holy water at the slightest mention of the foul beasts. In the late 1600's hundreds and early 1700's, they were often associated with witches, either accompanying them to black masses or being one in the same as shape-shifting counterparts."

And here's the link to the complete article.
Posted by Nick Redfern at 7:20 AM