An Anthology of the Redfern Kind 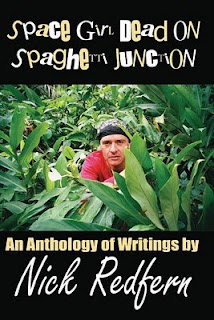 The good folk at the CFZ have just published an anthology of my writings, covering the period 1982 (when my writing career began) to last year, 2010. Titled Space Girl Dead on Spaghetti Junction, the book covers such issues as Cryptozoology, Ufology, music, history, conspiracies, the Chupacabra, the world of Hollywood, crop circles, dragons, werewolves, Roswell, the Contactee movement, and much much more.

Here's Jon Downes, editor and publisher of the book to tell you more:

"New from CFZ Press, the second book in our acclaimed series of fortean anthologies. In this volume, Nick Redfern remembers his mis-spent youth, and presents anecdotes from a long career of causing fortean mischief. He also presents pieces of his writing from various times over the past three decades, with notes placing them into historical context. Of course, Nick being Nick, there are also quite a few smatterings of his inane humour."