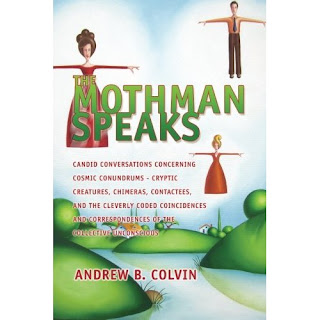 For fans of Mothman, good news! The new book from Andy Colvin - who, arguably more than anyone else - is keeping the flame of Mothman alive - is now available. Titled The Mothman Speaks, it is, like all of Andy's previous books on the subject, a huge one, running at almost 500 pages.

I'll be reviewing the book as soon as I have read it. Meanwhile, here's the product data on the book:

Spurred by the realization that the 9/11 attacks were accurately predicted - in 1967 - by a childhood friend who was seeing Mothman, Seattle artist Andy Colvin began filming a reality series, The Mothman's Photographer, documenting his experiences growing up in West Virginia. The Mothman Speaks chronicles the thoughts and feelings of several Mothman experiencers in the years immediately after the attacks. These revealing letters, penned during a wave of odd synchronicities, sightings, and encounters, indicate that Mothman may be a guardian angel of mind-bending proportions. Increasingly, the Mothman events look to be as important and miraculous as the famous events at Fatima. Interwoven with these personal diaries are discussions between Colvin and other witnesses and experts that reach back into the mysterious history of the Ohio Valley, giving a fuller context for the phenomenon. Colvin also tracks the relationship between the paranormal and the media - how the two seemingly work together to help form public opinion and belief. Also included is a chapter featuring previously unpublished material from the late John Keel, author of "The Mothman Prophecies." "A great paranormal/conspiracy thriller..." -Lesley Gunter, The Debris Field "Many enlightened truths, all converging..." -Dreamers Online "Really enjoyable..." -Karyn Dolan, Through the Keyhole "The best conspiracy going..." -Harriet Plumbrook "Fantastic! Should be in everyone's Paranormal Top Ten..." -Regan Lee, UFO Digest "All-encompassing... The most important new development in the study of the Mothman entity." -James Smith, TheMothman.org "Until I read Andy's work, I had no idea of the scope of this experience..." -Walter Bosley, Latitude 33 "A breakthrough in how we perceive the mysterious..." -Greg Bishop, UFO Mystic "It's too bad we all don't go through this kind of learning process..." -John Keel

In the 1960s, on a West Virginia backroad, Andy Colvin and his family and friends had encounters with the supernatural birdman popularly known as Mothman. Following those encounters, Colvin found that he could draw, sing, and take photographs, and that he had a photographic memory. Colvin was quickly recognized as a prodigy, and was eventually offered a National Merit scholarship to Harvard University in 1977. While attending graduate school at the Univ. of Texas at Austin, Colvin helped found U.T.'s Transmedia Dept. and the Austin Film Society, an organization now credited with bringing commercial filmmaking to Texas. In 1985, Colvin used his tuition grant money to purchase the only 8mm camcorder then available, becoming the first filmmaker in Austin to shoot in the new format. His documentation of the lives of Austin "slackers" influenced the seminal cult hit that defined Generation X, "Slacker" - a project for which Colvin helped raise funds and equipment. Colvin's band, Ed Hall, appeared in the film and on the soundtrack. Colvin also influenced the soundtrack of another breakthrough film, "El Mariachi," which effectively redefined how independent films are made. Following graduate school, Colvin worked on Hollywood films, toured with his experimental performance troupe, The Interdimensional Vortex League (once named America's "most underground band" by Europe's hip arts magazine, "Blitz"), and began making small, ethnographic documentaries about unusual tribes, subcultures, and personalities. His 25-year study of modern Texans, Multislack, is due out in 2012. Colvin's work has been seen or heard in all 50 states, and in several foreign countries. His writing has been featured in various magazines, including D'Art, the arts journal for the Church of the Subgenius. Colvin's unique career has been studded with various mind-blowing, synchronistic events, some of which allowed him to study with, or somehow collaborate with, some of the greatest creative minds of the 20th Century, including Nam June Paik, Lee Friedlander, Keith Haring, Dennis Hopper, David Lynch, Robert Anton Wilson, Laurie Anderson, Daniel Johnston, Vito Acconci, and the Butthole Surfers.

Here's Andy, photographed by me last month when we were roaming around some of the stranger parts of the California desert... 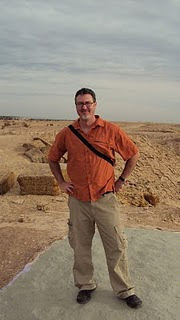