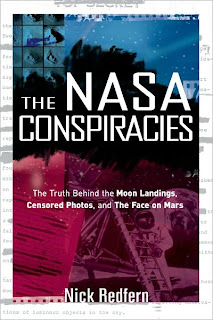 This week, I’m pleased to announce, my new book is published: The NASA Conspiracies: The Truth Behind the Moon Landings, Censored Photos, and the Face on Mars. And while the book focuses, for the most part, on such issues as UFO sightings by astronauts and tales of outer-space conspiracy, it also addresses claims that NASA may have had some involvement in incidents relative to unknown animals.

Included in the book are accounts concerning alleged NASA knowledge of (A) Puerto Rico's pesky Chupacabras; (B) the Bigfoot controversy; and (C) even a strange Mothman-type beast seen near NASA's Johnson Space Center, Houston, Texas back in the 1980s.

For more information on the book, click here and here.
Posted by Nick Redfern at 1:41 PM