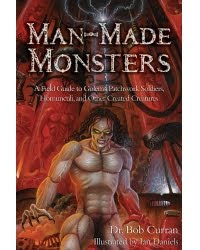 Here's a book I received a review copy of in the mail yesterday: Man-Made Monsters by Dr. Bob Curran. I've only had chance to take a brief look at it so far, but it looks very good. I'll be reviewing it as soon as I've read it. And in the meantime, here's what the publisher - New Page Books - has to say about Man-Made Monsters:


Life exists all around us, in forms that we can readily and easily identify. But what if there were, lurking in the shadows, other forms of life that are not so familiar, creatures created not by Nature, but by Man? We know their names—Frankenstein, the Golem, the homunculi of the ancient alchemists; they exist in our stories and myths.

But just what are these mysterious creatures, and do they have some basis in reality?

In his fascinating and wide-ranging new book, Dr. Bob Curran explores man-made monsters and the truth behind the myths. You’ll learn fascinating details about:

• The 19th-century scientist who tried to bring the dead back to life—the model for Mary Shelley’s Frankenstein.

• The Man of Clay who lumbered through the streets of medieval Prague at the command of early rabbis.

• Tales of robots that may have existed in the ancient world and threatened Greek and Roman warriors.

• Cloning and the artificial creation of life, and what strange and mysterious areas they may be heading into.

Man-Made Monsters is essential reading for anyone who wants to explore artificial beings and peer into the dark recesses of the human mind...where they may indeed be hiding.

Dr. Bob Curran was born in a remote area of County Down, Northern Ireland. Since leaving school, he has travelled throughout the world, fascinated by the myths and stories he has found. He has written a number of books looking at culture and lore, including Vampires; Lost Lands, Forgotten Realms; Zombies; and Werewolves, all for New Page Books. He lives in Northern Ireland with his wife and family.

Illustrator Ian Daniels, who has illustrated book covers for science fiction luminaries Marion Zimmer Bradley, Orson Scott Card, and Poul Anderson, lends his unique artwork to another New Page title, as he has to all of the books written by Dr. Curran.
Posted by Nick Redfern at 7:42 AM