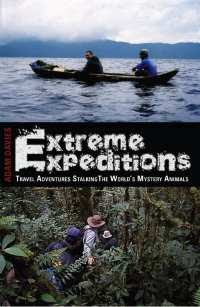 Those are broadly the four themes that dominate the packed-pages of a highly entertaining new book from Anomalist Books: Adam Davies' Extreme Expeditions - Travel Adventures Stalking The World's Mystery Animals.

Anomalist Books are at the forefront of publishing high-quality books on general Forteana, and Extreme Expeditions is a good addition to their line-up, and does not disappoint.
Basically, the book is a travelogue that sees our fearless author (and a variety of friends, colleagues and fellow monster-hunters) heading off to a whole range of exotic and far-away locations in search of mysterious beasts of a truly cryptozoological nature.
Like me, Adam is a Brit; and, as the book is written very much in the form of a personal diary, it contains (as the back-cover states): "...foul language, excessive drinking, sexual situations, and encounters with some creatures of the natural world that would scare young children and more than a few adults as well."
So, in other words, if you're looking to find out what really goes on behind-the-scenes during the course of a quest for monsters in exotic locales, then this is most definitely the book for you.
Adam writes well: he skilfully presents to his audience the details of the many and varied expeditions upon which he has embarked, including (A) 1998 trips to Sumatra (in search of the Orang-Pendek) and to the Congo (where he looks for the Mokele-Mbembe); (B) a 1999 quest to solve the riddle of the Norwegian equivalent of Nessie: Selma (a quest that is particularly - and spectacularly - successful); (C) a wild trek to Mongolia for the legendary Death Worm; (D) a second journey to Mongolia (this time for the Yeti-like Almas); and (E) much more of a monstrous nature.
The trials and tribulations that go with being a seeker of unknown animals are thrust into the spotlight time and again in the pages of Extreme Expeditions, too. Indeed, they demonstrate that, at times, monster-hunting can be a distinctly hazardous business. For example, Adam and his friends find themselves in more than a few dicey situations with gun-toting officials and military forces in the Congo; they cope with heat-stroke, wild animals, bites and stings as they scour strange lands for even stranger animals; they bargain, barter and do whatever has to be done to seek out their quarry; and (for those non-Brits that may want to read the book) you get to learn a great deal about British culture and how we like to pass the time of day - and night, too!
And with respect to the key issue of the book - strange and unknown animals - you won't be disappointed. Adam's search for Norway's Selma is a real highlight; and one suggesting the beast is a very real one. His quest to find the Orang-Pendek is illuminating (for what he discovers - such as some notable footprints); it's also tinged with sadness, however, as a result of the fact that the creature (whatever it really is) may very well be on the verge of extinction.
Adam also uncovers a wealth of data on the Death-Worm and the Almas (which, as the book shows, may also be on the verge of extinction, if it hasn't already gone belly-up), and makes it very clear to the reader that, despite what some people might assume to the contrary, our planet is still one steeped in mystery.
Easy to read, packed with adventure, intrigue, humor and (of course) monsters, Extreme Expeditions is a book that's entertaining, informative, memorable and instructive - in equal measures.
Posted by Nick Redfern at 9:14 AM

1) The frozen squid was awesome. I'm not a huge Lovecraft fan but I appreciated the literary "reference."
Now if we could find a way to observe a LIVE one. Think of the knowledge humanity could gain!!!
2) The Ireland story---cute litte precker, ain't he!!!
Bit of Luck O' The Irish there.
Again, Welcome back!!!

Thanks C,
The gig was a good one (if you're into UFOs, of course); somehow, however, I knew there would be a mass of stories surface while I was away!