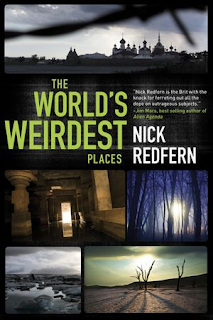 In September, New Page Books will publish my book, The World's Weirdest Places, which will include a significant body of cryptozoological data and which is described as follows in the blurb accompanying the book:

"Just in time for that most mysterious and macabre of all nights--Halloween, of course--Nick Redfern unleashes The World's Weirdest Places, his latest darkly entertaining supernatural title.

"In its mysterious pages, you will find Redfern's personal top 25 paranormal-themed locales, and the strange, amazing, and diabolical things that lurk within them.

"From the legendary Loch Ness, Scotland, to the slopes of Mount Shasta, California; from the dark depths of the Solomon Islands to the heart of the Kremlin; and from the magical landscape of Sedona, Arizona, to the turbulent waters of the Devil's Sea of Japan, The World's Weirdest Places reveals the sheer astonishing scale of strangeness that dominates our planet.


"Bigfoot, aliens, ghosts, vampires, UFOs, lake monsters, strange energies, enigmatic vortexes, werewolves, and terrifying demons are just some of the bizarre things that populate these parts of our planet, which provoke as much fascination and intrigue as they do fear and horror."
Posted by Nick Redfern at 10:51 AM

I am looking forward to reading this!