Mystery Animals of London - In Print! 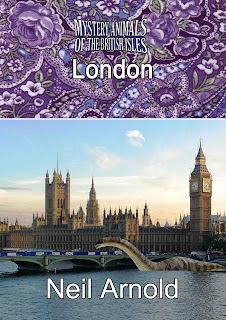 And, here's the press-release that accompanies this must-buy title, which runs to more than 400-packed pages:


MYSTERY ANIMALS OF THE BRITISH ISLES: LONDON
A Book By Neil Arnold

Roll up, roll up! For the monster mystery tour, step right this way. Read all about, read all about it, panic on the streets of London!

For many centuries the streets, sewer systems, skies, waters, and darkest corners of the capital have been inhabited by strange creatures. Some folklore, some fact.

MYSTERY ANIMALS OF…LONDON, a new, richly illustrated, fully indexed 385 page volume written by full-time monster hunter Neil Arnold, published by CFZ Press, is a unique surreal safari through the concrete jungle of London, which explores a menagerie of the strange, creatures cast from the Ark, half-hinted and yet persistent in their presence.

Recoil in horror at tales concerning elusive ‘big cats’ on the prowl through London’s leafy suburbs, with yarns pertaining to the ‘beast of Sydenham’, the lioness of Winchmore Hill, the Edgware tiger, and the classic Surrey puma - a long-lasting mystery which Neil proves may well have its origins centuries previous to the 1960s flap which made national headlines.

And then there are the abominable animals said to lurk in the depths of the River Thames and other London rivers, ponds and lakes, from tales of alligators, crocodiles, piranha, snapping turtles and even sharks, to grim legends of monster rats, slithering snakes and serpents.

And don’t forget the aerial oddities, with weird tales of giant birds in the skies over London – eagles, parakeets and monstrous griffins and dragons.

MYSTERY ANIMALS OF…LONDON looks at creaky old tales of animals escaping from private menageries, zoo parks and circuses. And then there are the monsters of the mind, for instance, the case of Hampstead’s phantom ape, the spectral bears of Chelsea, frothing hellhounds at Newgate, a ghostly chicken…yes, you read it correct!

And who could forget the ripping yarns pertaining to mermaids, Spring-Heeled Jack, glowing lions, flying jellyfish, birds of death, the London Underground man-beast, the Stratford Goatman, fairies, hellish horses and the case of the Highgate ‘vampire’.

An essential read on a foggy night for any monster-hunter, historian, paranormal enthusiast or general fan of the macabre and the mysterious.

Priced £15.00 from Amazon and all good book shops, MYSTERY ANIMALS OF THE BRITISH ISLES: LONDON, where the wild things are…dare you venture forth on this expedition of the extraordinary and lift the lid on London’s ludicrous and most devilish denizens ?