This past Saturday, me and good friend (and co-author on Monsters of Texas) Ken Gerhard headed out to Lake Worth, Texas, for the annual Lake Worth Monster Bash that celebrates the town's legendary Goat-Man that burst onto the scene in the summer of 1969, and which still attracts attention to this very day.

Last year was the first event, and such was the success of it, the organizers decided to make it a yearly gig. And, indeed interest in the Goatish one shows no signs of stopping: there was huge attendance throughout the day, far more vendors than last year, and a fun, relaxed vibe that made it a cool day.

Ken and I were on-hand to promote Monsters of Texas and to tell people about the history of the Lake Worth monster - and we also received a number of interesting accounts from people who had had their own encounters of the monstrous kind in Texas and elsewhere.

Here we are, after the gig, relaxing with a drink or two at a local hang-out place that is a favorite of me and my wife, Dana (who, not exactly being a fan of all-things crypto went shopping for clothes instead LOL). Ken is in the cowboy hat and I'm the one who looks half asleep... 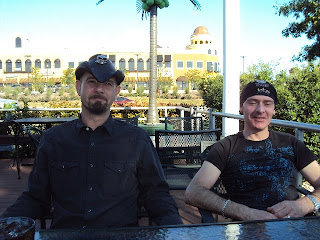 We had a good time at the bash. Sorry I didn't get a chance to come by and say hello, but my younger son did manage to get your book for his brother's birthday gift. Although, I'm not sure it's not going to be a well read copy before birthday time.

Hope your son enjoys the book!